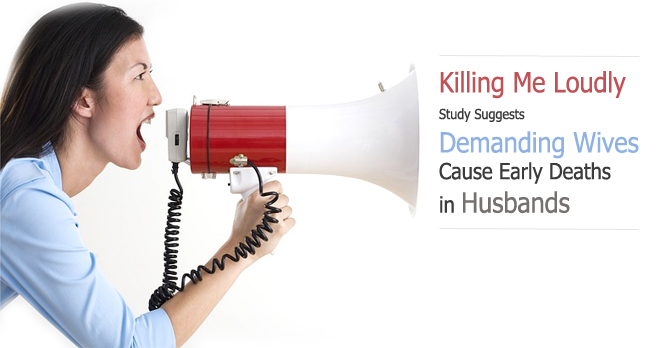 The story of a girl and a boy

Do you remember the first time you met with that special someone? You probably thought, “Wow I could not get enough of him/her” and “I want to spend the rest of my life with this amazing person.” But then, reality happened and before you know it both of you are confronted with real-life problems with real-life dilemmas faced with real-life consequences. Bills don’t pay themselves, babies don’t feed themselves and house chores certainly don’t do themselves without a person willing to take the time and effort to do it properly all day everyday. These stressful responsibilities take a toll on your patience. As a result, spouses often get stressed-out and pour their frustrations on each other by arguing all the time.


It is certainly no mystery why married people are arguing all the time, however, it turns out arguing and the worry associated with demanding loved ones have quite an impact on health. According to to research published online in the Journal of Epidemiology and Community Health, arguing with spouses, neighbors, and relatives can shorten an individuals lifespan, and may trigger unexpected early death.

The study surveyed nearly 10 thousand Danish men and women age 36 to 52 years of age. These were the two main questions asked to the participants of the study verbatim:

Related: 10 Conversation Secrets Everyone Should Know About

For the second question, the top answer was tied between partners and children at 6 percent. Here is the amazing part – in the course of 11 years 6 percent of the men died and 4 percent of the women. The researchers, who factored in demographical idiosyncrasies such as gender, marital status, physical and psychological health etc., determined that frequent worries caused by the demands placed on them by their partners and children were 50 to 100 percent more likely to suffer early deaths. The researchers added:

“In this study, we found that men were especially vulnerable to frequent worries/demands from their partner, contradicting earlier findings suggesting that women were more vulnerable to stressful social relations.”

Women are tougher than men

By no means is this study suggesting women do not suffer negative health effects, but the 2 percent difference in the mortality rate of the participants highly support the hypothesis that men are in fact more susceptible to stressful social relations. The findings in this research study support other claims in a recent study by University of Buffalo that “women are tougher than men” when it comes to dealing with mild to moderate stress which could be due to the stress resistance granted by the the enzyme aromatase which is connected to estrogen, the female sex hormone.

Women may be more important to the human race

This may also explain why there is an observed difference in life expectancy between males and females. An article by Scientific American suggests that stress resistance is not the only reason. Women are seen as “less disposable” by mother nature which is why women have longer lifespans – they bear children, the nurture the young and keep them alive. A study in Tanzania saw children with no mother’s fared a lot worse than children with no fathers. It could be that the evolution has determined that longer living men are unnecessary while longer living women are absolutely necessary for the survival of the species.

What should you take from this article? The next time your girlfriend or your wife has a yoga or massage session, maybe you should tag along and do some downward dogs because science suggests you may need the same kind of relaxation immersion as she does. The more new scientific findings support the detrimental effects of stress on the human healthy and psychology the more it become obvious that relaxation is a necessary part of a healthy lifestyle for both men and women.