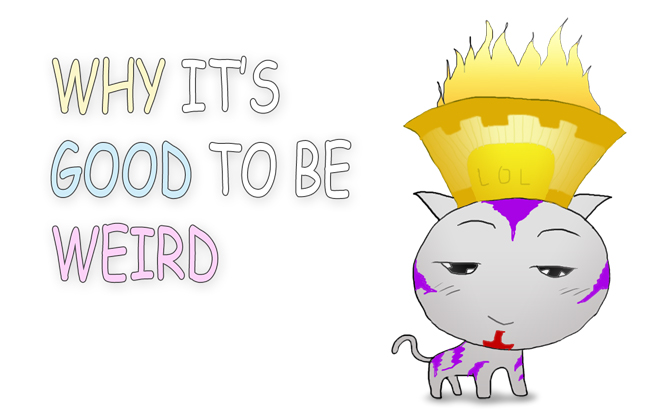 I was driving home from the gym one day. It’s hot and like usual I close all windows in my car and turn OFF the AC. This turns my car into a moving sauna. Whenever I get a good workout I make sure to do this because at that point I’m already sweaty so might as well ride with it, literally.

Anyways, as I was in my car basically drowning in perspiration I caught a glimpse of something bright red to the far right of my peripheral vision. As I kept driving and got closer, the figure of a man with the weirdest motorcycle attire emerged driving along the bike lane.

“I had to forcefully pry my eyes off of him…”

He was crouched over a small bright red scooter which is obviously too small for him and wearing a puffy top paired with equally puffy pants. Wearing a black helmet, it seems like he didn’t even care to fasten the straps so they danced in the air like Dumbo’s flappy ears. I’m pretty sure that rendered the helmet useless since that thing will fly right off if not secured during a collision. Add the fact that he was going LITERALLY at a rate of 1 mph with the severely concentrated face of a NASCAR driver and the upper-body posture of someone who took Alexander technique classes and you got yourself one very interesting sight.

I had to forcefully pry my eyes off of him because you never see something like this here in the United States. In short, he would be seen as someone on the weird side. I live in Northern California and people here often look perfect as pie. Of course I’m exaggerating a bit, but you get my point.

“You don’t need to be perfect.”

Here, when people go on a jog they wear jogging attire, when they go for a swim they wear swimming attire, you see lots of people running around staying fit and smiling at everyone they meet. That’s not a bad thing really, in fact that is awesome, however, there is an underlying implication that is not necessarily being seen.

You don’t need to be perfect. It’s okay to be somewhat odd, or weird, or out of place. It’s okay to be awkward in conversations. I often times encounter many awkward handshakes where the person is trying to shake the hand of your friend but I extend my hand out because I thought he was trying to shake MY hand and then it gets awkward as you all try to change the trajectory of your hands which eventually results in a tangled mess. The truth is that we are all weird. We all have habits and mannerisms that don’t necessarily fall into the generally accepted norm.

Nowadays, people try so hard to look perfect, talk perfect, have the perfect phones and gadgets, have the perfect job, have perfect friends and basically have the perfect life. It may look good on paper, but ,just like how winning the lottery doesn’t equate to happily ever after, trying so hard to be perfect can lead to an unhappy life. “Weird” is often a term used to denote things that fall outside of the norm, an ideological concept that falls within the acceptable spectrum of perfection, however, being weird can be a good thing. Here are 6 good reasons to be yourself and embrace your weirdness.

If you embrace your own personal weirdness and not care about what people think, you begin to see that there is an entire world waiting to be explored. Trying to be “cool” or “hip” would trap you within imaginary walls sapping the freedom out of your life.

I don’t care much about what the latest phone is, so I stick with a Go Phone phone that can call and text. For me, wasting so much money on apps and fads that don’t give me much in the way of personal satisfaction other than simply being with the “hip” crowd is pointless.

It’s quite interesting the amount of criticism I have received from this simple decision to step out of the norm. I have met people who immediately changed their opinion about me the moment they see me using an old phone. However, instead of spending 60 to 100 dollars on a phone plan I was able to save that money up and bought myself a DSLR camera, cash.

I was also able to save up enough money to build a high end personal computer by simply choosing to not own an expensive smart phone, and now it has enabled me to save enough money to pay for the hosting of Yawn Central. True, my earning potential may have not changed, but my willingness to be seen as weird in exchange with the practicality of spending money on things I actually care about has given me more financial freedom.

I’ll tell you what, I will probably remember that guy on that red scooter till the day I die. Who knows I might even paint masterpieces about him. My point is, people who try too hard to fit in and end up getting drowned out by the endless ocean of people. If you simply try to be yourself then people will see you for you, and guess what, there is only a single YOU. Your natural uniqueness will leave an impression on people and you will be quite a memorable individual.

Related: How Street Beggars Could Teach You To Become More Successful

Many people think likeability is about being funny, being attractive, or just being all in all awesome. It certainly helps to be a combinations of those things, but what truly makes a person become attached to another person is when they get to know them on a whole another level. Knowing their deepest secrets, their most vulnerable thoughts, and seeing the world through their eyes is what makes a person truly care. Weird people have the confidence to reveal more of themselves to the people in their lives because they are not afraid of being judged. This type of temperament carries with it a certain type of charm that can be quite irresistible when you meet the right person.

One interesting thing lottery winners have experienced is the fact that the number of their friends and family suddenly sky-rocket the moment they hit the jackpot. And once all their money is gone, so do those extra acquaintances.

In life there are people who make friends with you just to look good, or just to have someone to be with. Many people have their own desires and insecurities in life and often times they use other people either knowingly or accidentally to hide from their fears or supplement something missing in their life. It’s a sad fact about life, but the good thing is that there are equally as many amazing people who are looking for genuine friendship and relationship. Being your own weird self wards off judgmental individual who mostly seek social status from friends. The people who will get to know you are the ones who are genuinely curious on knowing the vast intricacies of the skittle universe known as your personality.

When it comes to art, you need to be able to express yourself with no holds barred. Weird people find it easier to be creative because they are afraid of failing. Fear of failure is a major obstacle in releasing creative potential. Some people who are more uptight feel some kind of release by expressing their weird side through their art and it all in all becomes one beautiful marriage of discarnate life concepts and tangible matter creating artwork that blows people’s minds.

Want to chuckle like a chicken while doing a handstand on top of your IKEA bookshelf wearing a horse mask? Knock yourself out. Even though in actual day to day situations we are often confronted with less extreme urges, many of us are reluctant to do things that we want because we fear people will think we are weird. That is not how you live life. Being your own weird self lets you rise above the fear of being judged and allow yourself the time of your life every day of your life.

A quote by Mark Twain I posted a while ago about dreams states, ““Twenty years from now you will be more disappointed by the things that you didn’t do than by the ones you did do. So throw off the bowlines. Sail away from the safe harbor. Catch the trade winds in your sails. Explore. Dream. Discover.”