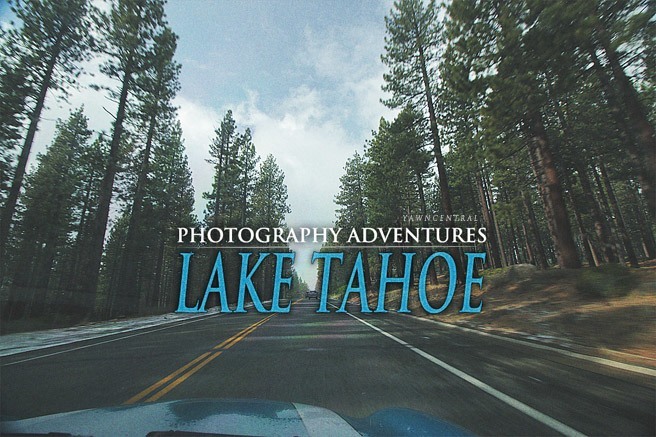 Welcome to the first photography adventure with MrCloud in 2015! You can also check my previous one in Clearlake California. This time I went on a short road trip to South Lake Tahoe.

South Lake Tahoe is a popular vacation spot in Northern California during winter months primarily due to skiing. People get the trademark “ski tan” because the snow reflects the sunlight as you stand on it, but of course I didn’t do that because I don’t anything about skiing. What I do have some knowledge of is photography (not by much). And South Lake Tahoe is simply mesmerizing during summer when all the snow melts and it’s natural lush terrain is revealed. It has an amazing landscape specifically the Emerald Bay that is known for having some of the clearest waters in California.

With this in mind, I decided to go there during the early months of 2015 so I could witness it for myself. It was a fun relaxing trip in nature, but me and my friends got a pleasant surprise right before we left, so keep reading to find out what it was. 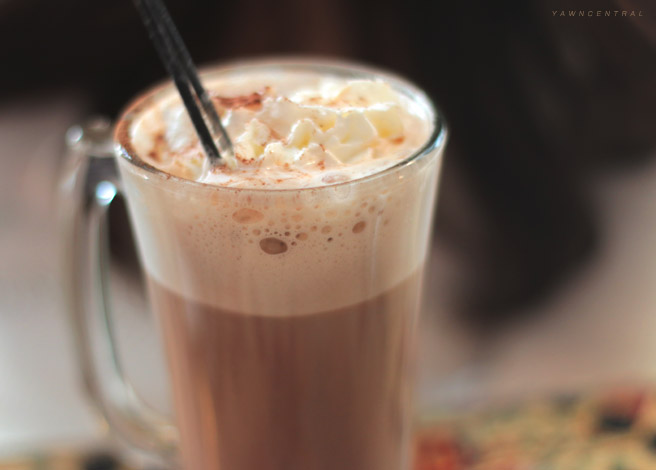 Sweetie Pies Placerville – We decided to have a stop over to refresh, rehydrate and take care of “personal business” before we go into the stressful winding roads on the way to Lake Tahoe. So I looked up breakfast places in Placerville and found this place called Sweetie Pie’s.

Turns out this place is awesome. It had a very unique atmosphere to it. I’m not sure if its the food, the interior design, or what. But what I do appreciate a lot is the fact that the servers seemed genuinely nice people. Not nice because they risk being written up if they don’t do so, but it felt like they were actually enjoying themselves.

If you have ever been in a crappy restaurant and you see the servers there, you can pretty much tell from the faces of the employees whether the place is being managed correctly. They look like they just donated 10 gallons of blood and they overlook a lot of things because they just don’t care about what they do – its all artificial.

In this place, it felt like I walked into my uncle’s barbecue party and everyone’s just sitting down and hanging out. It was a totally relaxing experience and I’m glad we decided to have breakfast here. Not to mention the food was better than most breakfast places I’ve been too. I don’t know what it is, but this place has something about it.

Also for this photo I used the Canon 50mm 1.8 prime lense which is primarily used for portrait photography. I opened up the aperture to maximum which allowed for the shallow depth of filled and resulted in this silky smooth look. Makes me want to order another Cappuccino Latte Soy Milk with Whip Cream on top in a venti cup. I’m kidding this ain’t Starbucks. 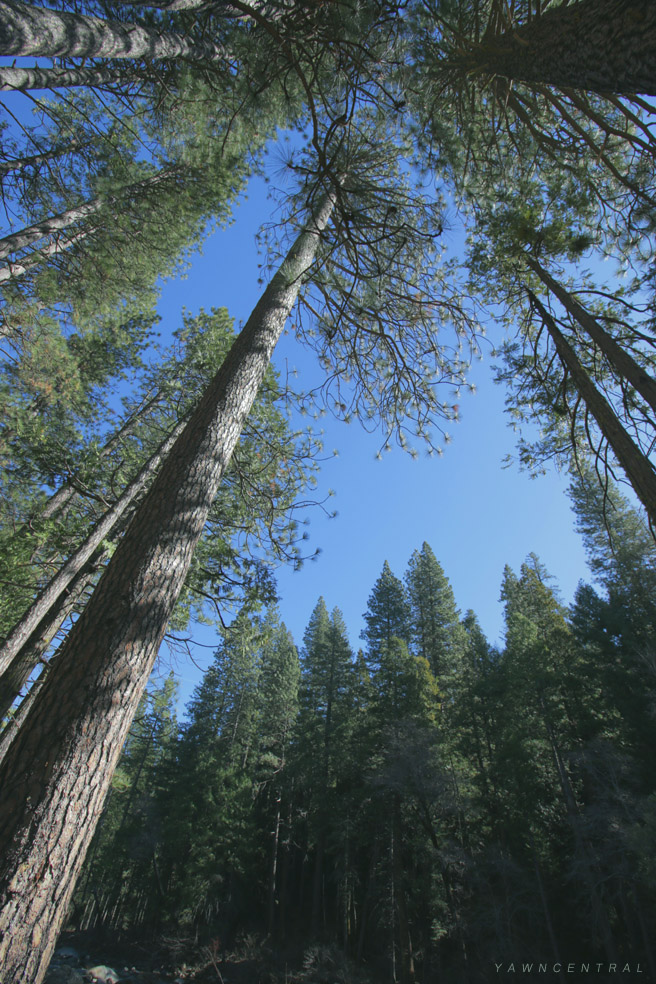 Wandering Trees – People despise going on road trips with me not because I’m a horrible travel buddy (or at least I don’t think so), but primarily because I have the bladder of a pregnant woman. Since we just had a few drinks at Sweeties Pie’s I had to make a quick stop over so I could “be one with nature.” This was somewhere in between Placerville and Emerald Bay State Park, and it was surprisingly scenic. I looked up and took a quick photo and it turned out pretty decent so here you go.

For this photo I switched back to my usual landscape lens which is the Canon 10-18mm wide angle focal length. I thought it was pretty cool how the trees were all converging towards the same vanishing point (naturally) and makes for a very geometrically aesthetic look. 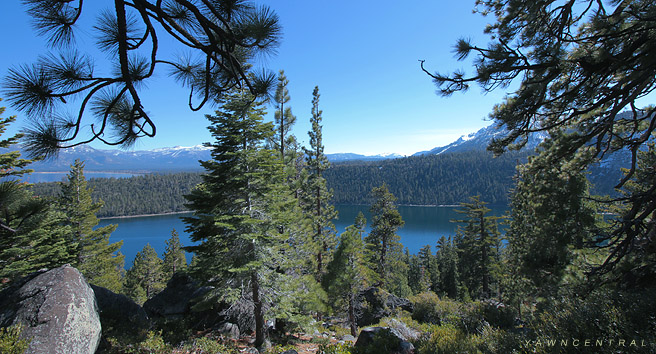 First Glimpse – The drive to Emerald Bay State Park was beautiful and terrifying. The highway (whoever designed this was a genius and a mad man as well) came to a point where you are literally driving on a narrow strip of road that has cliffs on both sides. I would have taken a picture, but I was too busy watching the right side of the car ever since my friend hovered the car tires off the right side of a curved path.

Since it was so narrow you have an amazing view of everything – the lake, the trees, the sky and the mountains. It literally felt like that moment when the scientists got a glimpse of the Jurassic park island. It’s scary, but absolutely breathtaking and totally worth it.

The picture right here was taken once we found a parking spot. After just a few steps off the road into the trees, you get a first glimpse of the blue lake. The water was pristine and this picture doesn’t do justice as to how beautiful the lake is. They weren’t kidding when they said this lake has one of the clearest waters in California. 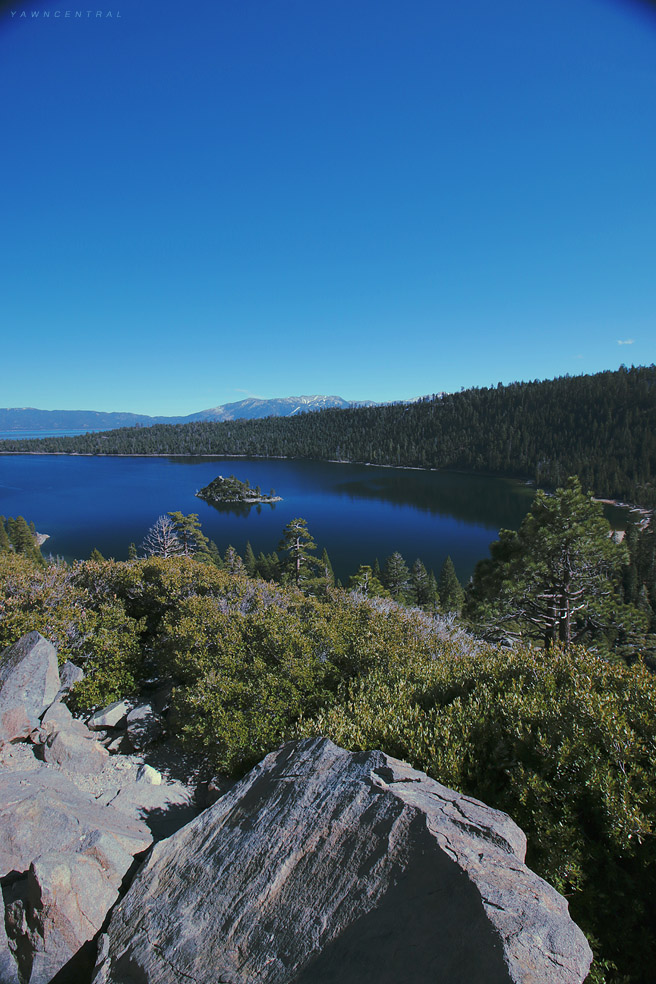 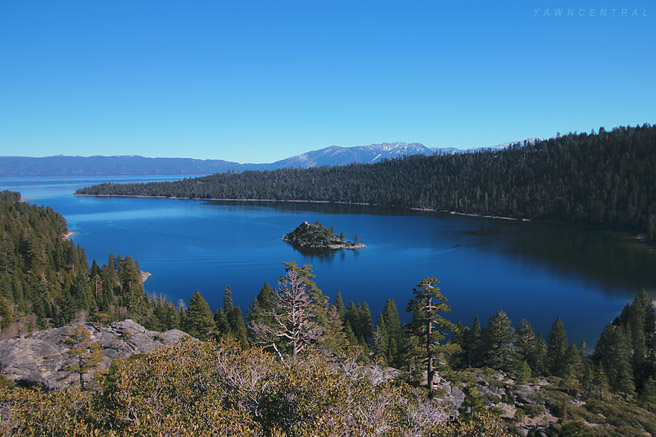 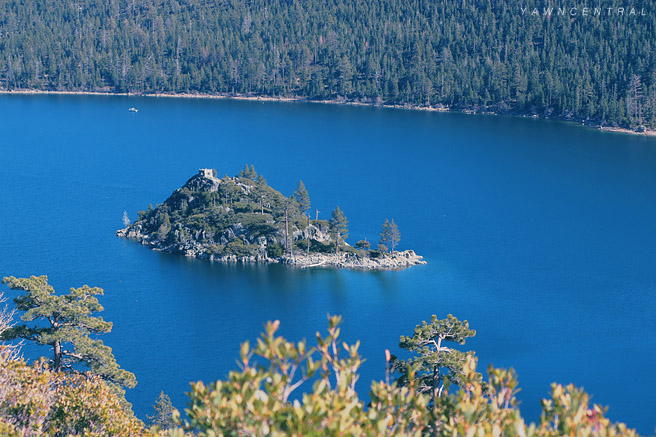 Emerald Bay, South Lake Tahoe – These are probably my favorite photos of the trip, though to be honest I was wishing I brought some graduated filters since the sun was extremely bright and it almost washes out the colors (most noticeable in the last photo). Thankfully I brought my ND filters to help with the overexposure problem a little bit.

This was taken at the very top of the trail that leads down to the base of the state park. The island in the middle is apparently a coffee shop. We didn’t go there because you need to pay a boat to go there and we couldn’t find the boat. 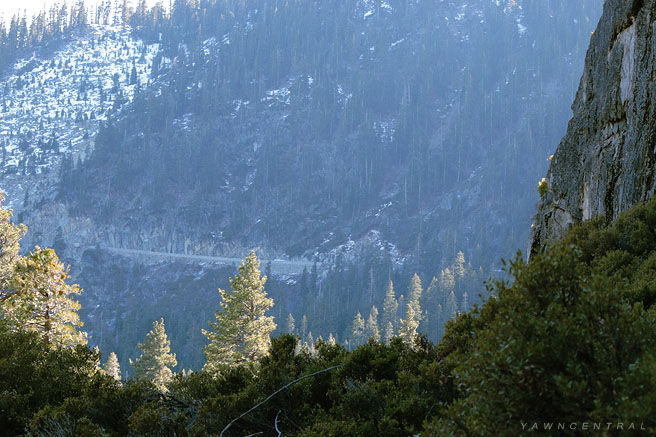 Hiking Trail – We started walking down the trail and it’s very funny how you see everyone walking up has a blank look of utter exhaustion. I realized exactly why their faces were like that on my way back up.

One side of the trail you’ll see a view of the bay getting closer and closer as you progress downwards, and the other side you see this view where you can see highway 89. If you study the cliff face carefully, you can see a part of it has smaller younger trees growing and I talked to some other tourists and they say those were because of an avalanche that occurred. I mean avalanches look fluffy on video but they can uproot trees. With that thought in mind, I will probably never go skiing. 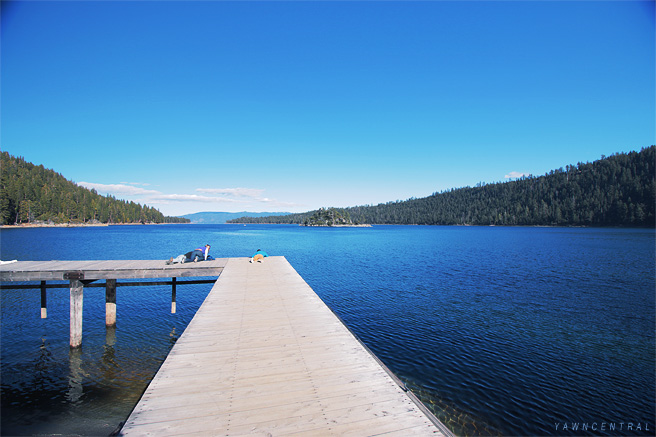 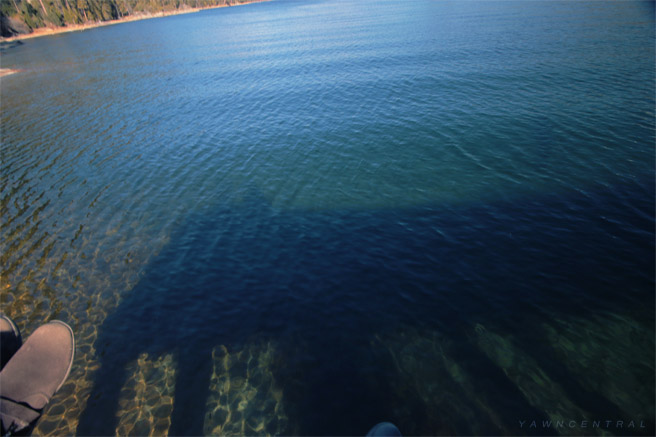 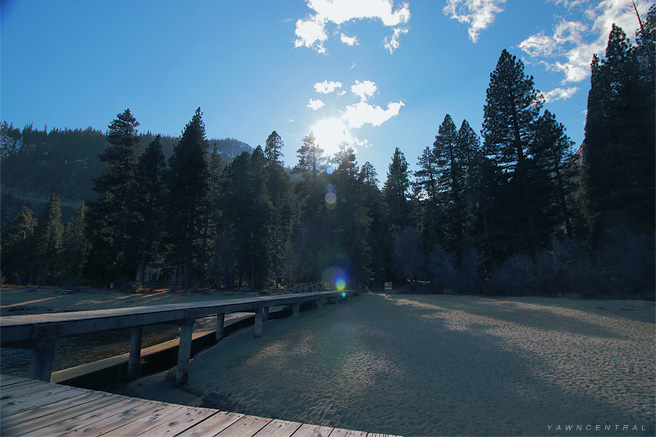 White Sand Beach and a Dock – All the way down to the bottom of the hiking trail was probably 30 minutes in total. It was totally worth it because the white sand beach is absolutely serene. The water was so clear I could totally see the ducks’ padded paws flapping in the water.

The place is so big that even though there was a good amount of tourists, it didn’t feel crowded. I met a photographer from Daly City who was there with his family. We had small talk and I, like usual, cracked a joke and totally botched the punch line. Things got awkward and I started to pretend to take pictures just to escape from it. He kept talking to me because he was a nice guy. Though to be honest I think he just wanted to show me pictures of his newly born baby.

I took a picture of the dock facing the lake, but the viewfinder was so small I didn’t realize there were people there, so I accidentally took photos of their butts. I apologize whoever you are. I didn’t mean to show your butts to the two people visiting this website.

After this trip into the beautiful core of nature, we decided we also had to visit downtown Tahoe where the grass is green and buildings don’t need ac because it’s freezing cold there. I was wearing a thick hoodie and it still goes through it. If you plan on traveling, always bring a thick jacket just in case.

We ate at a sushi place with a very cool sushi chef. It was difficult interaction, however, since the restaurant was noisy and the sushi bar was so high that it blocked our voices. He kept cracking jokes that I can’t hear. I tried to tell him to say them again, but I still can’t understand it. So I pretended to get the joke and just kept a perpetual smile on so I don’t seem rude.