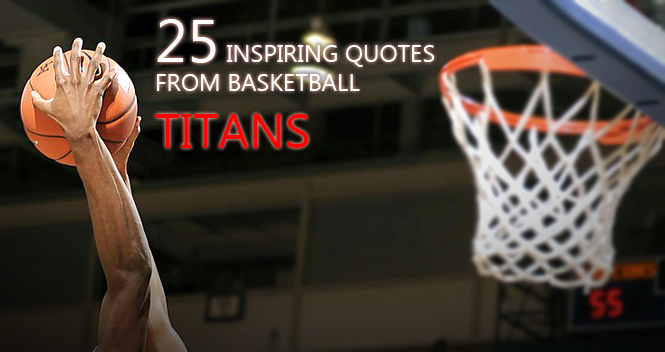 If you think about it basketball is nothing but a bunch of tall guys chasing after one bouncy rubber ball. However, it is more than that – primarily because of the sheer amount of talent and athleticism demonstrated by the greatest basketball players of all time.

These individuals have made amazing sacrifices and ooze raw will-power which is why they are among the best of the best. I will show you a piece of their mindset. Here we bring 25 inspiring quotes from the biggest titans of basketball.

“I’m not playing for other people. If I start thinking in those terms I would put too much pressure on myself. I play basketball because that is what I love to do.”
“Sometimes you come up against a mountain and you end up making the mountain seem bigger than God.”
“I was shocked cause I didn’t even know that they made my jersey. I didn’t know that they made it so fast, so when I saw it I was like, I had to look three times and I was like, ‘Did they customize that?’ And then I saw a couple of other ones and I was like, ok, they must’ve made them overnight or something.”

“I enjoy jokes, smiling, and making people smile. I may be a little different, but that’s OK, who wants to be normal anyway?”
“The time when there is no one there to feel sorry for you or to cheer for you is when a player is made.”
“I’m surrounded by nothing but great people. I’ve been blessed with that, so really, I’ve got no choice but to be an all-around good person.”
“I’m just going to play whatever game is in front of me.”

“I like criticism. It makes you strong.”
“You can’t be afraid to fail. It’s the only way you succeed – you’re not gonna succeed all the time, and I know that.”
“You know, my family and friends have never been yes-men: ‘Yes, you’re doing the right thing, you’re always right.’ No, they tell me when I’m wrong, and that’s why I’ve been able to stay who I am and stay humble.”
“I treated it like every day was my last day with a basketball.”

“I don’t know what I’m going to do tomorrow. I just know for sure I’m going to keep playing basketball.”
“I’m just trying to grow. That’s one thing I told myself is, Don’t worry about who people say is the best player.”
“My time is now.”

“Everyting negative – pressure, challenges – is all an opportunity for me to rise.”
“I don’t want to be the next Michael Jordan, I only want to be Kobe Bryant.”
“I have self-doubt. I have insecurity. I have fear of failure. I have nights when I show up at the arena and I’m like, ‘My back hurts, my feet hurt, my knees hurt. I don’t have it. I just want to chill.’ We all have self-doubt. You don’t deny it, but you also don’t capitulate to it. You embrace it.”
“The most important thing is to try and inspire people so that they can be great in whatever they want to do.”
“If you’re afraid to fail, then you’re probably going to fail.”
“I’ll do whatever it takes to win games, whether it’s sitting on a bench waving a towel, handing a cup of water to a teammate, or hitting the game-winning shot.”
Please consider sharing this post on the social media platform of your choice. It lets us know we are creating content you are interested in. You can choose facebook, twitter, google plus, pinterest, tumblr or stumbleupon in the Spread the Yawn section below. Follow me @MrCloud101 if you have any questions or just want to see some interesting positive tweets. Consider subscribing for instant post updates whenever a new post is released. I hope you enjoy your visit at Yawncentral.